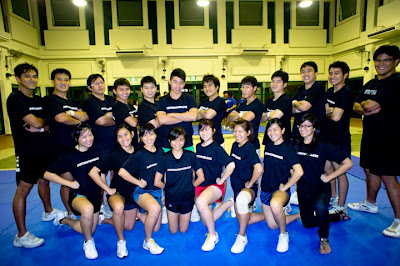 We may not be perfect as individuals but together as a TEAM, we shall be :)

this is what u do when ure too upset with results and ended up sleepless.
anw, i came across this over fb in xuewei's profile. i think its pretty useful to us, just click here to look at the video :)

&&&lets stay focus and train hard for HO. its just 2weeks away!

On the 13th Jan 2011, 11 Spectrum cheerleaders transformed into Milo cheerleaders to promote Milo's newest product to a bunch of aunties and uncles and a very encouraging italian boss hahahahaha, who smiled and nodded throughout the performance.

It was especially memorable for me as it was my first routine performance as a cheerleader! Putting on the milo packet 'uniform', hitting stunts to the music and cheering my guts out felt great. I think that despite all the difficulties that we had, with height problems and all, it was a really fun performance :)
Thanks Veron, for always pushing us on and coming up with the routine for us! Thanks Choonfu, Dajun and Mathew for pushing on despite being unwell!
and...
WELL DONE EVERYONE FOR THE DANCE!!!!!!! I'm really astonished at the massive improvements in a mere 3/4 days you guys were great!

i was unable to fall asleep so i decided to write this post on our cheer camp that ended last week. i managed to finally register as this is my first time using blog. -.-' Well, this is my second time writing this cos i accidentally closed the browser before i can publish it during the first time. FML... Pardon for my CUI Ang Moh.
Monday was the start of the camp. Luckily or unluckily (depending on how u see it), vincent was unable to make it but training still carried on with a certain degree of xiongness. A lot of us were still nursing the aches suffered from the mini game ah fu played the previous week. (JUST squats with flyers on shoulder sits)
Tuesday was a bit slack i think as there was only the afternoon session. at night, we went to the airport to send Samuel (a.k.a aunty lucy) off for his overseas exchange program.
Wednesday was the start of the "Eat, Cheer, Sleep" routine. Well, that was what i did. When i thought my muscle aches were starting to disappear, and there came PT sessions. "No Pain, No Gain eh" I never longed for my bed so badly in my Uni life.
Out of the 5 days, Thurday's night training was the most memorable. Vincent had a little surprise for all of us. A "short" run around the campus. Even though i am a student in NTU, i never knew that are so many slopes in the campus. Though tough and tiring, no one gave up. We started and completed the run as a team. Applause for everyone especially yang yang and Da Liang. everyone was high on adrenaline and spirits were high too. we managed to hit stunts that was once unhittable.
after training was a shopping trip to NTUC to buy food for the steamboat the next day. We treated the place as our playground. Imagine Vincent in the trolley as Ah fu pushing him around. -.-' It was also then that i learned about the 2 golden rule if u wan to sit ah fu's car:
1. Never say it is a school ***
2. Never touch anything in the car. "Just Shut Up And Lock"
The long awaited friday finally came but many of us were showing signs of burnout and falling sick including Vincent. training was toned down as many of us had IHG on that day. Vincent plans of having a dip in the pool was also burnt as the girls refused to enter. the idea of it being a CF (****fest) just turned everyone off.
steamboat at night was awesome. there was this homey feel though it was held in the function hall. it was also my first time watching TV in hall... -.-'
Actually, cheer camp is just the start of the hectic training schedule that is to come in the following week. Training will definitely be tougher when HO is approaching. Here's a few quotes if u need inspiration:
"Without the bases the stunt wouldn't work. Remember that and always thank your bases for a good job well done!"
"Cheerleading makes people think differently... suddenly a liberty isn't just a statue in NY, pyramides aren't something you find in Egypt, and gladiators aren't people of ancient Rome"
Cheerleading is a sport where teamwork is of utmost importance. The team is only as strong as the weakest link. Do not cheer for the sake of doing it. You have to be happy so as to enjoy the whole process. 台上三分钟，台下十年功.
Jiayou everyone for the HO. Give your best and have no regrets. i shall finally go to sleep.
Posted by jialiang at 1:46 AM No comments:

Heard from Vincent that you guys are gunning hard for this year's competition. Jiayou!

I have some tips that might be able to aid you along the way. This is something i posted 2years ago but it's still very relevant.

Pls click here if you have the time. Cheers!
Posted by chaang at 1:16 PM No comments: