Hey ppl, I think it is time we get a little more serious and pick up our pace.

I'm not against kidding around when not doing stunts. In fact, I'm a big fan of that. But up on a stunt, I try to give it my all. The thing is, lately we have been wasting stunts away, and we dun seem to be bothered by it.

In this routine, we are doing lotsa transitions. It doesn't matter that we hit all pyramids individually during training. If we failed one transition, it is equivalent to failing the pyramid that follows. Right now, we have no transition that has 50% hit rate yet. What worries me is that we were still laughing when we failed a stunt/transition.

We are going to start running the routine soon. It's gonna be tiring and there will def be mistakes when we try to catch up with the music. It would be worse if we din make sure that our stunts and transitions have a higher hit rate outside the routine.

I know all of us are working hard now. Let's work even harder for the next 2+ weeks!
Posted by Yva at 12:36 PM No comments:

we're only human you know... 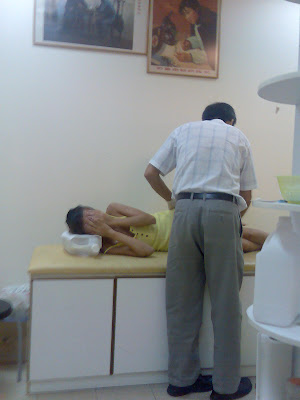 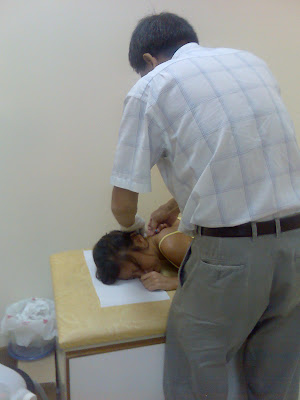 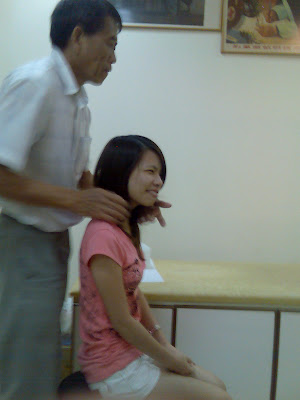 WF getting the cracks 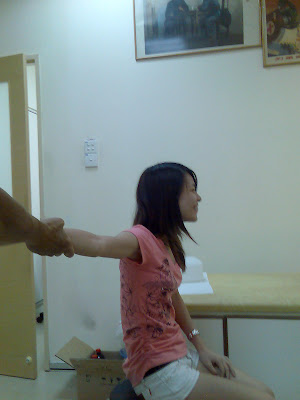 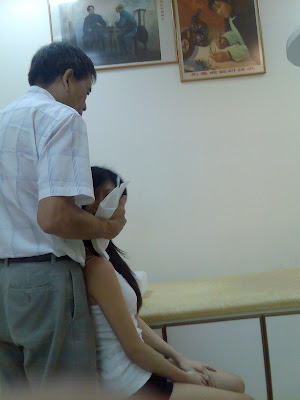 JN also wasn't spared. Sorry viewers her hair blocked your view. LOL.
Spectrum's Team Doctor is located at:
S.K. Lim Chinese Physician & Acupuncturist
blk 78B
telok blangah st 31
#01-26
singapore 102078
Tel: 67741162
Be sure to give the clinic a call before you go down cos they are closed on certain days!
highly recommended by chaang !!
Posted by chaang at 2:40 AM No comments:

Email ThisBlogThis!Share to TwitterShare to FacebookShare to Pinterest
Labels: physician

yes.. i know it's very disrupting (scroll down to the entry below) but we gotta change our training schedules again. Please take note of the following dates :

As you all know, our effective training timing is only 2hrs because not all of us stay in hall. As such, be responsible and reach training on time. If one person comes late, we cannot do our pyramids since everything is inter-linked.
Posted by chaang at 12:50 PM No comments:

Email ThisBlogThis!Share to TwitterShare to FacebookShare to Pinterest
There have been a few updates for Cheerobics 2008 , as listed below.

Change in Date
The date for Cheerobics 2008 will be changed from 22nd March 2008(Saturday) to 16th March 2008 (Sunday). We apologise for this second change, for the previous change was from 8th March 2008 (Saturday) to 22nd March2008 (Saturday). The initial change was made as several primary andsecondary school teams gave feedback that their students need more time tobe ready and able to participate; however, upon announcement of the initialchange, several open category teams replied that they would not be able toparticipate on the 22nd March 2008.As such , considering the concerns of both sides , CAS has decided to cometo a middle ground and set Cheerobics 2008 on 16th March. We understandthat it is both confusing and frustrating for the team managers orteachers-in-charge , but would like to reiterate that the changes isnecessary to benefit participants from all categories.

Reduction in Registration
FeesSeveral teams gave feedback that this year's registration fees hasincreased substantially , and could work against CAS's goal to promotecheerleading and the Cheerobics event. CAS would like to explain theincrease in fees.
The official funding that CAS receives has reduced as the authoritieswork towards a goal that all sports associations attain a business modelwhereby they are more financially independent. As a result , CAS iscurrently in the midst of a budgetary transition where she builds moresponsor relationships with various companies in support of cheerleading.
The bulk of the increase in fees would go towards (a) funding cashprizes and (b) inviting top IFC judges from around the world ; while themain cost of the Cheerobics event is still funded by CAS and sponsors. Webelieve part (b) is necessary to increase the prestige of the competition ,and also important to connect our local fraternity with the rest of theworld.In consideration of affordability concerns , CAS has decided to reduce theregistration fees to $100 and $30 for team and group stunt categoriesrespectively ; and that there would be no cash prizes this year.

*Note: we will cut trainings should we be able to hit our objectives. In the meantime, do block out these dates.
Posted by chaang at 12:24 AM No comments: 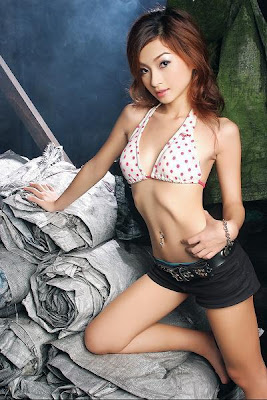 CR's note: All of us have been in this sport for sometime already, and we all know that what can go wrong, will go wrong. Hence, it is important that all of you have some basic first aid knowledge. I came across this article which i found very useful.

During a BBQ, a friend stumbled and took a little fall - she assured everyone that she was fine (they offered to call paramedics) and just tripped over a brick because of her new shoes. They got her cleaned up and got her a new plate of food - while she appeared a bit shaken up, Ingrid went about enjoying herself the rest of the evening. Ingrid's husband called later telling everyone that his wife had been taken to the hospital - (at 6:00pm , Ingrid passed away.) She had suffered a stroke at the BBQ. Had they known how to identify the signs of a stroke, perhaps Ingrid would be with us today. Some don't die. They end up in a helpless, hopeless condition instead

S * Ask the individual to SMILE.

T * Ask the person to TALK to SPEAK A SIMPLE SENTENCE(Coherently) (I.e. It is sunny out today)

R * Ask him or her to RAISE BOTH ARMS. NOTE: Another 'sign' of a stroke is this: Ask the person to 'stick' out their tongue.

If the tongue is 'crooked', if it goes to one side or the other that is also an indication of a stroke. If he or she has trouble with ANY ONE of these tasks, call 911 immediately !! and describe the symptoms to the dispatcher.
Posted by chaang at 2:57 PM No comments:

Dear Nuffnangers ( this is our blog advertiser btw ) ,
With Valentines Day just around the corner, Nuffnang is pleased to announce a new contest brought to you by Nike Women.
February 14th is a day close to the hearts of all budding couples. It is the day lovers express and reaffirm their love for one another. Ooh, doesn't it give you a fuzzy feeling!
The "This is Love" contest hosted by Nike, is an opportunity for all Nuffnangers to share your love for sports. How has sports brought you closer to your loved one? How has sports evolved around you? How did it make a difference in your life? How has it brought your blood to a boil and infused you with passion? Do what bloggers do best, EXPRESS yourself, PROCLAIM your love, and get rewarded for doing so!
They're sponsoring a romantic dinner for 2 worth $500+++, on Valentines Day itself. The venue we've chosen is the prestigious Les Amis Au Jardin.
Au Jardin is situated in a beautifully restored black and white house, set amidst the lush greenery in the Botanical Gardens. Headed by resident chef, Galvin Lim, it serves up contemporary gastronomic French cuisine. Au Jardin is every couple's dream date venue! You can find out more about the restaurant here.
All you have to do to qualify, is write a blog entry about how you enjoy sports with your other half, the passion you have for sports, and how it improves your lifestyle. Send your direct link (if available) to thisislove@nuffnang.com. More details can be found here.
Winners will be announced on the 11th of February 2008, and the deadline for submission is 10th February 2008.

With love, zest and passion!
Ming
Co-FounderNuffnang.com
Posted by chaang at 2:54 PM No comments: