~SPECTRUM'S
5TH ANNIVERSARY
GATHERING~
Last friday, 19 nov 2010, we sort of commemorated Spectrum's 5th anniversary by organising a BBQ session and invited all ex-Spectrum members back. Not everyone came back though, as expected due to busy work lifes and other committments, but the turnout was great nonetheless. :D
I was quite happy to see all the seniors coming back, and behaving as if they were still training together in hall 13. And I was even more happy to see that they still have a passion for cheer and still think of themselves as part of Spectrum. As much as spectrum has changed my live, I'm pretty sure Spectrum made a difference in theirs too. Thank you very much seniors! :)

We started the event off with a BBQ. And people started coming throughout the night. Wen Feng, Jun Hui, Lina, Colin and Lip Tat were among the first few to arrive, but food was not ready yet. Heeheehee. Anyway, to the juniors who may be unaware, Colin and Lip Tat came from PJC Team Syphors, which used to be coached under Spectrum. SAJC cheer squad was under us as well, but has since ceased to be cos cheer wasn't a highly approved sport in JC. To Colin and Lip Tat: do continue to cheer when you guys go to university ok? Join us if you can!!! :D 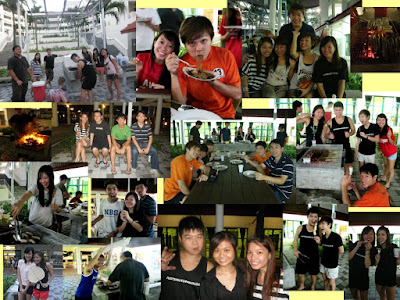 Bigbig thanks to our BBQman ah fu and ah liang!
Other random pics... 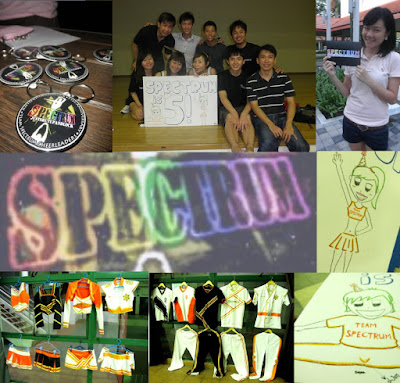 P.S. Thanks Suelin for doing the Spectrum guestbook, very nice! Thanks Jianing & Vinette for drawing the board, cute! Thanks cr, cy and sr for the use of your uniforms. Thanks Youjin for designing the superb badge (better than cf :PpP). Thanks Jialiang for travelling out to make the badge. Thanks everyone who buy our badge!!

After lots of eating, chit-chatting, laughing, photo-taking and whatnots, came the oh-so-familiar "SPECTRUM, ON MATS!!" It was time to stunt (hey, cheerleaders gathering of cos must stunt!) and we see people changing into their stunting gear. Feels so much better than working clothes right :) 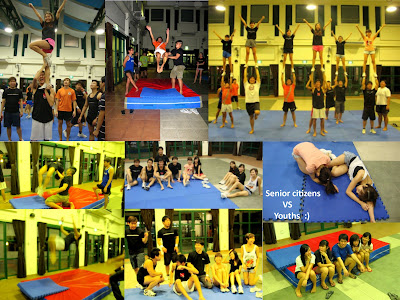 Once on the mats, everyone started to behave crazily and do stupid things. Kind of like a destress session for the working ones. It was a rare opportunity to stunt again after stepping out into the working world. Super funny to see the "rusty" seniors stunt again, using all sorts of cheatcode to get up the stunt. AND UNCLE LAWRENCE CANNOT DO EXTENSIONS ANYMORE! LOL!
playtime in between stunting... 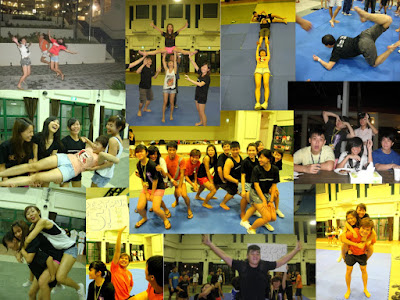 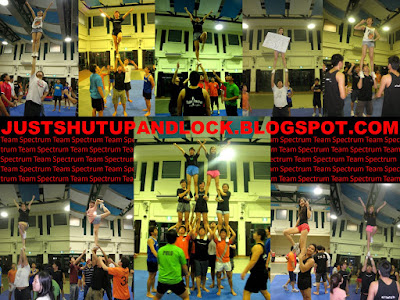 Then, because it was getting late, every gathered for a group photo! Actually, many group photos. We took pictures of Spectrum from every year. From the 05/06 batch, to the current 10/11 batch. It was like seeing how Spectrum grow and progress over the years, with different members, but the same spirit. If only more people could come... 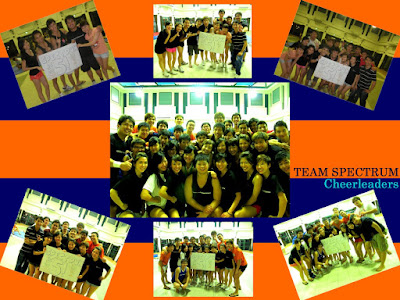 Lastly, it was debrief, then CHEER OFF! Cf led the cheer :) 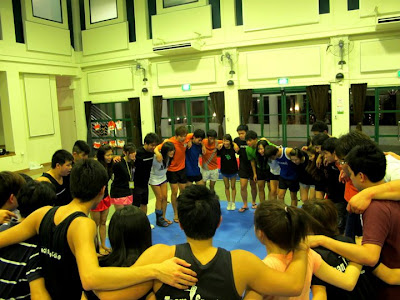 First and foremost, Chaang, who initiated this gathering and did lots of liaising. 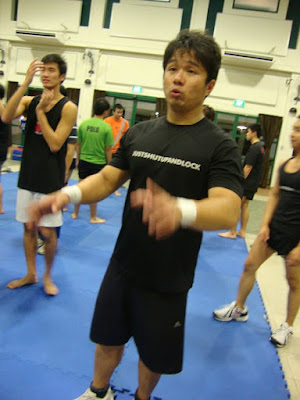 Next, current spectrum members (you all know who you are), for preparing this and that, buying food, collecting money, borrowing equipment, replying to messages, blah blah. I LOVE YOU ALL! Please mug hard for the upcoming exams and dont be like gerard!

Special mention to:
Eddie Yew, our pioneer batch senior, who contributed $50 to our canvassing fund! We are super touched!! Thank you very much Eddie!! :):)

Picture credits: Samuel, Elisa and Delan
(more pics can be obtained from their facebook album)
Posted by ||vavaron|| at 7:30 PM